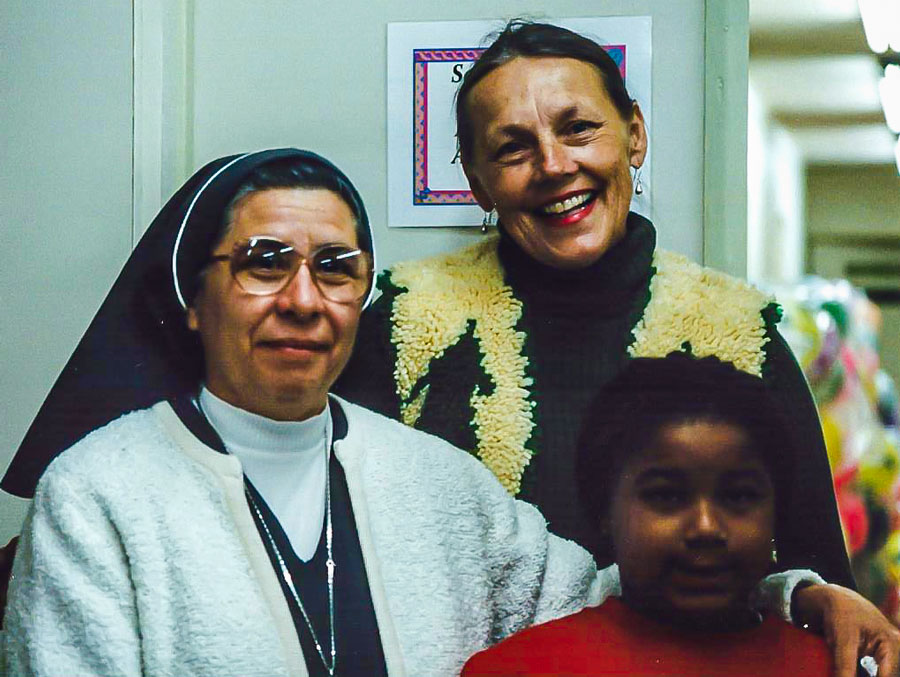 From the Southern Cross
By Vincent Gragnani

TIJUANA.  Open sores cover the face of cancer-stricken Angelina Armenta. She has one eye and few teeth. Three mornings a week, she rides two buses from her house in Tijuana’s La Gloria neighborhood to the Franciscan-run Casa de los Pobres. There she receives food and medical care.

Armenta shares her two-room house with her son, his wife and their three children. Her son works, but cannot support the family. So she, like thousands of other residents of Tijuana, depends on the open arms of the sisters of Casa de los Pobres just to get by.

Founded in 1957 by Franciscan sisters in the Colonia Altamira neighborhood of Tijuana, Casa de los Pobres provides food, clothing, medical care and education to the local poor. More than 40 volunteers and hundreds of donors help keep the Casa’s doors open.

“It’s the only organization we know of that performs all of the corporal works of mercy,” says Dick Bureson, who, with his wife, Nancy, runs Church Without Borders, bringing San Diego Catholics on daylong mission trips to Tijuana. “Tens of thousands have come to the Casa with little more than the clothes on their back, in need of virtually everything to sustain human life. No one is turned away. All are nourished, in body, mind and spirit.”

Casa de los Pobres is so well known in Tijuana, taxi drivers can usually take you there without needing to see an address. Thirty years ago, an angel brought Armenta to the Casa. She cries telling the story.

She was destitute, praying and begging in Tijuana’s cathedral, when an older woman took her to the Casa, then gave her money for the trip home. Armenta never saw the old woman – her “angel” – again.

Enedina Rodriguez – a widow whose 36-year-old epileptic wheelchair-bound daughter needs constant care – has visited the Casa since around the same time.She wakes up early every Thursday morning to feed, bathe and clothe her daughter, and then leaves her at home while she makes the half-hour bus ride to the Casa for Bodega Day -when volunteers distribute large sacks of groceries.

The sacks contain a variety of food such as rice, potatoes, beans, bread, sweet rolls, fruit and vegetables. Grocery companies donate most of the Bodega Day food in bulk, but when donations run low, the sisters buy food to supplement it.  “We have a commitment to the poor,” says Sister Maria Eugenia “Maru” Espinoza, MFP. “These people come from far away. It’s not fair if they go home with empty hands.”

Rodriguez also receives regular medication for her daughter through the Casa’s clinic. She lives in a house built by American college students, and receives aid from the Missionaries of Charity and her other children. Life without the Casa, she says, would be “more painful, more sad.”

Some guests, like Armenta and Rodriguez, have depended on the Casa for decades. Others visit for a few years until their lives improve. Still others, like volunteer coordinator Josephina Adame, continue to visit the Casa as volunteers long after they’ve received aid from the sisters.

Adame moved to Tijuana in 1979 with her then-unemployed husband and their six children, ages 9 years to 2 months. They visited the Casa for food, clothing and medicine. In return, Adame volunteered in the kitchen.

Today, thanks to the Casa and the greater glory of God, she says, her life is better. Her children have gone to school and now have jobs, and she and her husband now live with two of their sons, their daughter-in-law and their grandchild in a four-room house in the middle-class Colonia Tecolote.

“I do this work as gratitude to God and to the people who have helped me,” Adame says. “Every day I feel blessed by God to come here.”

As volunteer coordinator, she works at the Casa five days a week, eight hours a day. Over the years, she says she has seen many success stories similar to her own – families who have come to the Casa for a few years before moving on.

Sister Espinoza, who has ministered at the Casa for 32 years and also works in the diocesan Missions Office, says she, too, sees success stories – some families move into Tijuana?s middle class, others move to the United States. Occasionally, while traveling in California, she and her fellow sisters meet people who tell them they remember eating at Casa de los Pobres years ago during rough periods in their lives.

A hand counter tallies the outreach given from the Casa over its 47 years: nearly 10 million meals served, 1 million sacks of groceries, 575,000 clinic visits, 56,000 blankets and 6,700 scholarships.

The sisters’ work extends beyond the walls of the Casa, from outreach to orphanages and jails to collaboration with church groups and colleges north of the border. Private donations – no government or Church grants – fund Casa de los Pobres, run by four sisters of the 75-member Franciscan Missionaries of Our Lady of Peace.

“In the spirit of St. Francis of Assisi, we try to raise the self-esteem of every person who comes to us,” says Sister Armida Andrade, MFP, director of Casa de los Pobres. “We pledge to use the gifts we receive – money, professional services, food, medicine and materials – to serve the poor, so that our doors will always remain open.”

“The Gospel and the Catholic Church call San Diegans to support groups like Casa de los Pobres,” says Dick Bureson. “We are a universal Church, and we are all called to mission,” he says. “Here we have mission territory 15 miles away. Church doesn’t stop at the border.”

Casa de los Pobres is especially in need of groups and individuals who can make regular, monthly donations.

Visitors to the Casa appreciate the food, medicine, clothing, education and love they receive. With a wide smile and a hug, the cancer-stricken Armenta regularly thanks the sisters for their help. “The Casa means everything to me,” she says.

Despite Armenta’s sores, the sisters lovingly accept and return her embrace, adding love and dignity to the list of gifts they have given her.

For more information on how to help, contact Teresa Doyle at Friends of the Poor: 858-405-2331 or info@friendsofthepoor.us.